Today, I got taken on a big excursion, by Antonio and his friend Clevér (yep, that's his name!). The three of us went to Chaclacayo, which is virtually a town by itself, right on the Eastern edge of Lima, almost in the mountains. There, we visited Alexis Bellido — another of Antonio's Linux friends — who has a house out there, and who is also the only (known) Drupal developer in Peru!

Getting to Chaclacayo isn't exactly a walk in the park. From downtown Lima, the three of us caught a combi. Because today was Good Friday, the bus was very crowded, and it stopped anywhere and everywhere to pick up and set down passengers. I wasn't really timing, but the bus must have taken at least an hour to get to Chaclacayo, passing through the seemingly endless sprawl of suburban Lima along the way.

This bus trip was my first exposure to "the real Lima". The crowded, dirty, and poorly facilitated slums of Eastern Lima are worlds apart from the cosmopolitan sidewalks of Miraflores, which simply reek of wealth and classiness. I'm glad I was on the bus through this part of Lima, because I don't think I would have lasted 5 minutes on the streets here. The disparity between rich and poor in this city is large — appallingly so.

On this trip, I also saw worse driving and worse road-rage than I've seen so far in Central Lima (although they're pretty crazy there too). In fact, Limeños would have to be the worst drivers I've seen anywhere in the world. They drive fast. They never give way to pedestrians. They change lanes constantly and without warning. And they honk all day long. I don't know where they get their licenses, but I'm guessing it's somewhere like 7-11.

Anyway, after the long, cramped, and dangerous bus trip, we finally made it to Chaclacayo. Chaclacayo is a charming little town, that feels like it's definitely outside of Lima. It has a gardened central square, a string of restaurants and boutiques, and a raging river that passes through from the surrounding mountains. I guess it's a bit like Sydney's Windsor area, or even like Katoomba.

Alexis met us in the middle of town, and was very happy to see us. He said that he doesn't go into Lima much (he has a bad leg, and walks on crutches), and that people don't come out to Chaclacayo all that often.

The four of us (myself, Antonio, Clevér, and Alexis) went for lunch in town, where we had some great, traditional Peruvian food. I got some Seco de Res, which was a beautiful kind of stew. 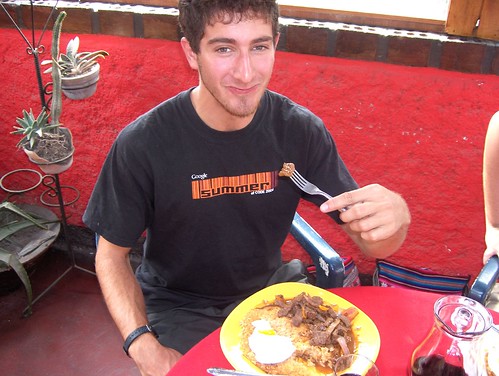 With all of us being Linux and Open Source fans — and with Alexis being a fellow Drupal developer — we had plenty of geeky conversation keeping us busy throughout lunch. 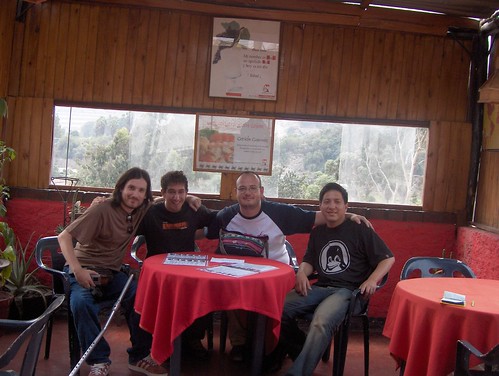 So, there were these four geeks sitting in a restaurant… Alexis, Jeremy, Antonio, and Clevér (left-to-right).

After lunch, we went to the corner store to buy some beer and some snacks; then we drove over to Alexis's house. Alexis's place is on a dirt road on the outskirts of Chaclacayo, with various vacant lots and unfinished homes all around. He explained that this is a new area, and that in 20 years' time it will be full, beautiful, and complete with proper infrastructure. For now, it's the Wild Wild West, and it's real cheap too. 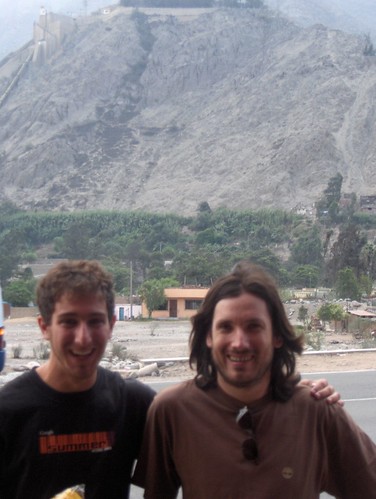 Alexis also pointed out where the "official" telephone line ends — about 50m from his house — and where he planted some sticks, and strung up a cable himself, to go the rest of the distance. If he tried doing that in Australia, imagine what Telstra would have to say about it!

Once inside we met Alexis's wife and little girl, and we went into his Linux-PC-filled, ADSL-and-WiFi-enabled office. Then, once we have a few bottles of beer open, we got down to the business of the day: podcasting! 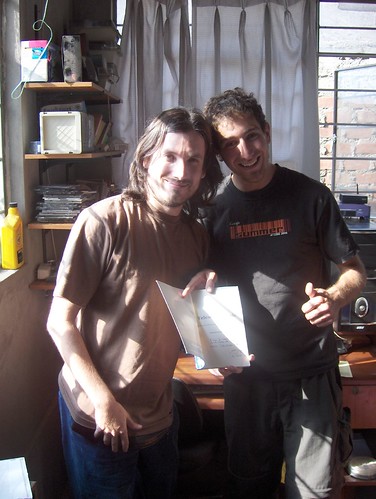 Alexis also wrote a book, of which he gave me a signed copy. :P

Yep, that's right: Alexis also publishes a Spanish-language, tech-centric podcast, and for his next episode, we are to be featured guests. Alexis recorded and interviewed a session with me (in English); and then he interviewed Antonio as well. Unfortunately, he accidentally saved Antonio's interview over mine — so my interview was lost, and we'll have to do it again some other time, over Skype or something. 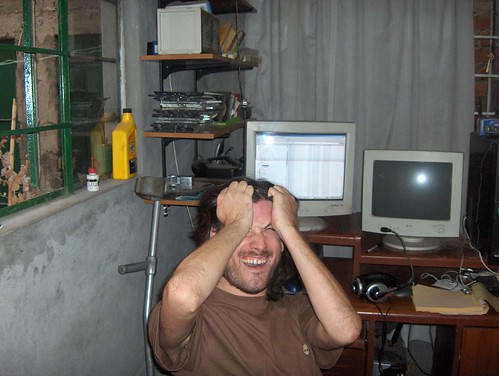 After we were done at Alexis's, the day was nearly through, so we got a lift back into the middle of Chaclacayo, and then caught another bus back to Central Lima. Great day, great people, great food, great place to visit, and great podcasting!